Victorian Premier John Brumby says his government is willing to resume wage negotiations with teachers at any time, but he has ruled out becoming personally involved in the talks.

“We’re willing, I think, to sit down at any time, so whenever they’re ready, we’re ready,” Mr Brumby told reporters. However, he ruled out entering negotiations himself.

“Obviously if you do that then every single industrial issue or EBA that comes up before government, then people expect the minister or the premier to be there and it’s just not practical or realistic to believe that that could be the case,” he said.

So our dear John, ex teacher and ex AEU rep, Brumby (like Keating said, “there’s nothing more ‘ex’ than an ex Prime Minister”) won’t sit down and talk with representatives of the worst paid teachers in Australia. However he can find time to have a wee chat with the even wee-er Bernie Ecclestone to work out how Victorians can lose even more money by retaining the Grand Prix on the hideously coiffed Dwarf’s terms. 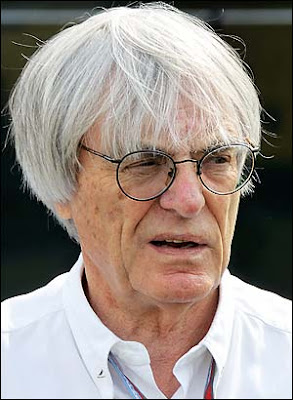 Melbourne’s Formula One 2007 Grand Prix ran at a $34.6 million loss, a report tabled in the Victorian parliament today shows.

The Grand Prix report, one of about 130 tabled in state parliament today, shows revenue decreased from $47.5 million in 2006 to $43.4 million this year.

The event cost more than $78 million to run, with the Victorian government picking up the tab for the shortfall.

With the cost of the event under intense scrutiny – the 2008 race is forecast to cost Victorian taxpayers $40million – Mr Walker defended the escalating and undisclosed license fee charged by Mr Ecclestone every year. He said the cost of building and dismantling the temporary circuit was running at about $30 million a year. The additional cost of running the event under lights is estimated at $60 million.

"Whether the move is sufficient to satisfy grand prix supremo Bernie Ecclestone’s demands for a night race is likely be known within the next six months, as the Victorian Government and Australian Grand Prix chairman Ron Walker enter negotiations on the future of the Albert Park race beyond 2010."

"Mr Walker said yesterday the fate of the event would be decided before Premier John Brumby travelled to London to meet Mr Ecclestone in October."

Teachers living off the smell of Bernie Ecclesdwarf's discarded oily rags. What's wrong with that?! Let them eat Valvoline!

Labels: Tossers., Weak as., Who's kidding whom?, WTF